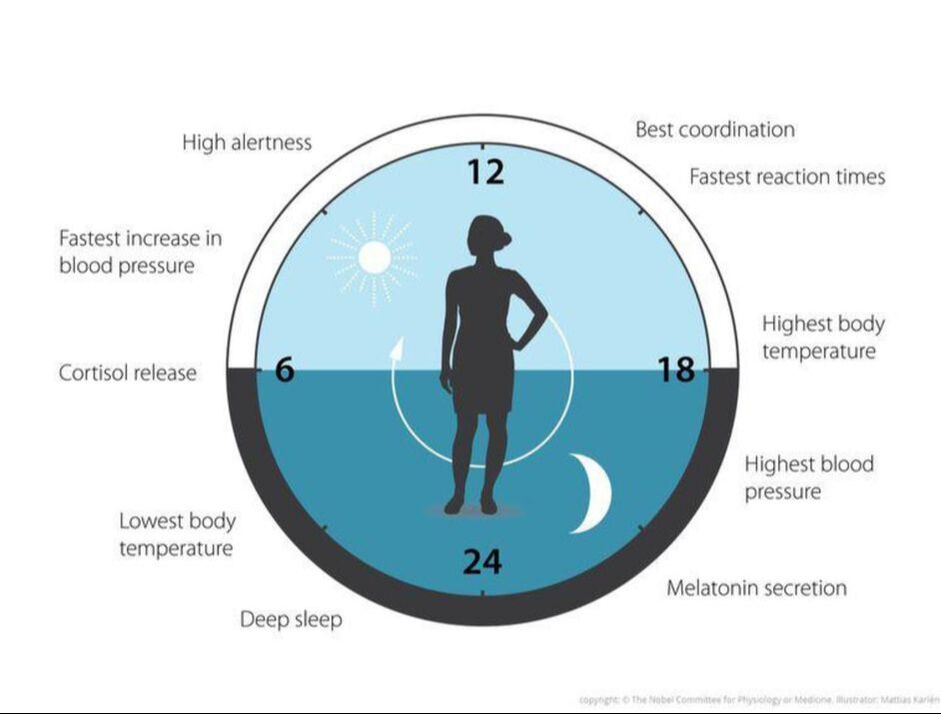 The master biologic clock regulating the timing of sleep and wake in mammals also regulates most if not all 24-hour (i.e., circadian) behavioral, physiologic, and biochemical rhythms. This master circadian clock is located in the bilaterally paired suprachiasmatic nucleus (SCN) in the anterior hypothalamus.

​The expression of most rhythms at the behavioral, physiologic, and biochemical levels is regulated by the integration of inputs from the circadian clock and the sleep-wake state.  Of particular note of the “downstream” rhythms regulated by the circadian clock is the feeding rhythm. In the last few years, a number of studies have demonstrated that the timing of food intake can regulate the expression of circadian clock genes in many peripheral tissues, which in turn control the 24-hour rhythm in the expression of many clock-controlled genes (perhaps as many as 10% to 50% of all genes expressed in a given tissue). The many interactions between the systems regulating circadian, sleep, and energy balance have led to much interest in the importance of these linkages to obesity, diabetes, and cardiometabolic disorders.

The longer one is awake or deprived of specific sleep stages, the greater will be the drive to recover the lost sleep or sleep stage. However, this may be true only after short periods of sleep deprivation because during continuous chronic partial sleep deprivations in rodents, there is a loss of the homeostatic recovery sleep increase, as the sleep-wake system appears to change from a homeostatic to an allostatic response system.
​
Our 24/7 society has led humans to be the only species that routinely ignores its biological clock as we are often awake when the clock is telling us to be asleep. Both the chronic disruption of circadian organization and chronic insufficient sleep have been associated with a wide range of mental and physical disorders. Modern medicine is only beginning to recognize that the treatment of many disorders of human health may need to take into account circadian science to improve overall 24-hour organization between and within the central nervous system and peripheral tissues.​

anatomy & physiology of the circadian system 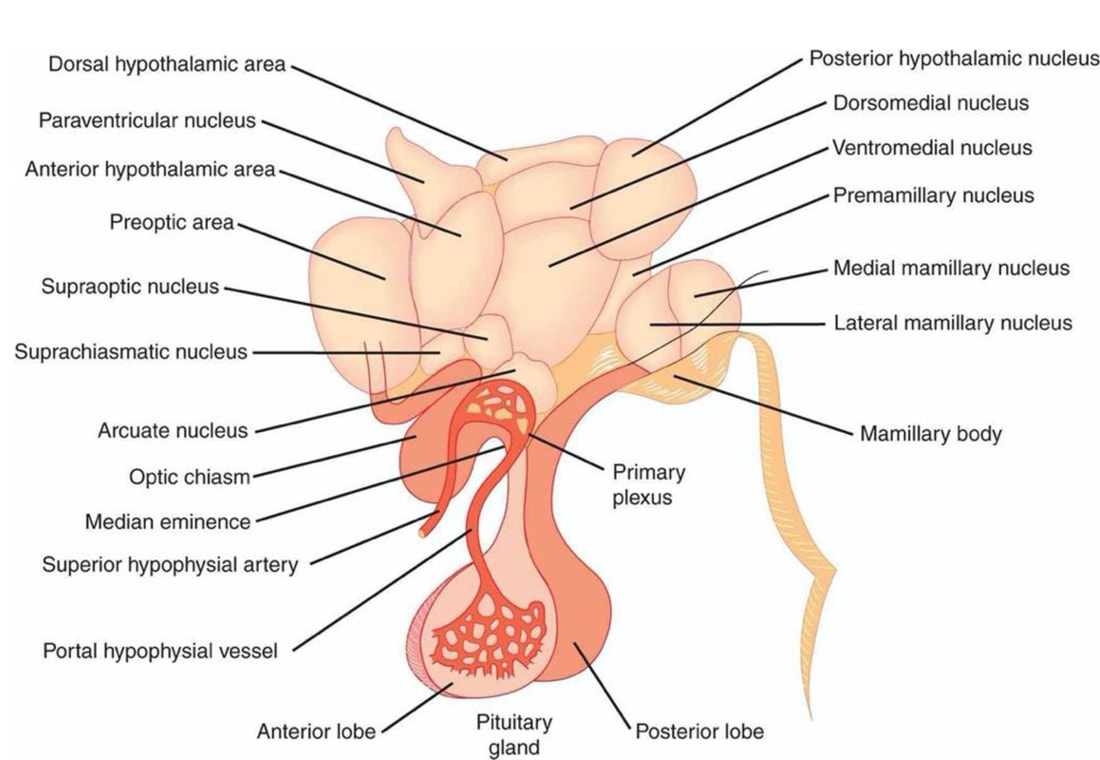 Circadian Regulation of Melatonin and Cortisol 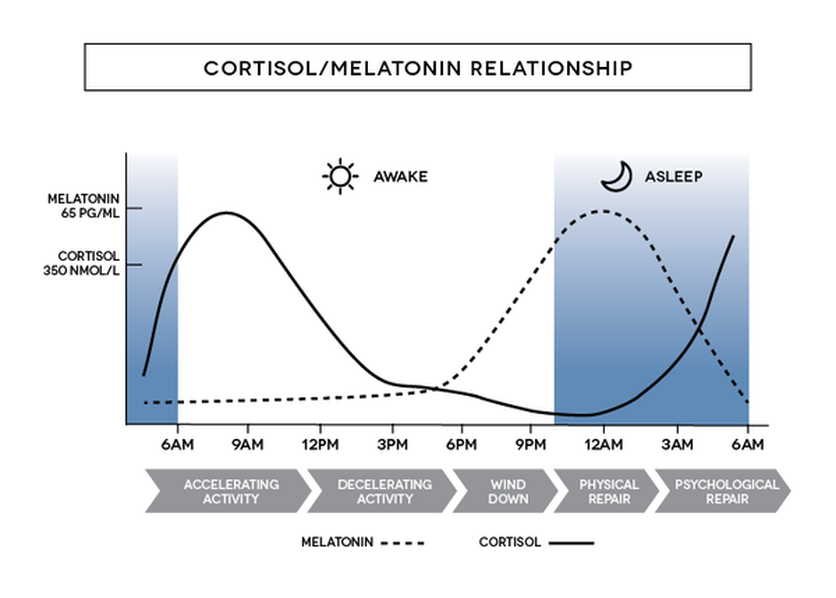 Synchronization of Central and Peripheral Oscillators Clinical Pearl
The suprachiasmatic nucleus is an internal body clock that allows daily scheduling of wake-sleep, feeding, corticosteroid secretion, and other bodily functions during a normal light-dark cycle. This cycle can be modified by light exposure or by administration of melatonin, which resets the body clock, but feeding schedules can also reset the daily activity cycle by acting on circuits that are downstream of the clock. Thus in patients with difficulty adjusting to shift work, jet lag, or other disruptions of their schedules, in addition to adjusting light exposure and taking melatonin, it is usually possible to adjust to a new schedule more quickly if the meal times, social interactions, and sleep-activity schedule of the new environment are adopted as soon as possible.

Exposure to light activates photopigment melanopsin (OPN4)-containing retinal ganglion cells (RGCs), which transmit light information to the core region of the SCN by releasing glutamate and pituitary adenylate cyclase-activating polypeptide (PACAP). The effects of light on SCN neuronal activity are modulated by input from NPY- and GABA-containing neurons in the IGL and serotoninergic input from the MRN. The solar cycle entrains the master clock in the SCN, which is responsible for generating circadian patterns of behavior.

The SCN regulates the circadian sleep-wake rhythm through a primary projection to the SPZ, followed by a secondary projection to the DMH. The DMH, in turn, projects to brain areas critical for promoting sleep or wakefulness. A direct projection from the SCN to the PVH mediates rhythmic control of melatonin secretion from the pineal gland, and an indirect projection from the SCN to the PVH through the DMH is critical for the circadian release of corticosteroids. Although SCN neuronal projections are required for photic entrainment and circadian control of endocrine rhythms, SCN-diffusible factors are sufficient to support a weak circadian rest-activity rhythm.

The SCN also coordinates the timing of peripheral clocks, which respond to SCN-directed circadian changes in temperature, glucocorticoids, and nutrient-sensing pathways. Through the aforementioned pathways, the circadian system ensures that sleep and other biologic rhythms are timed appropriately with respect to daily changes in the environment.

CIRCADIAN SYSTEM AND SLEEP-WAKE REGULATION
​Circadian clocks have several defining characteristics: a) endogenous rhythmicity that persists independent of periodic changes in the external environment, b) a near 24-hour period (circadian from Latin circa meaning “about” and dies meaning “day”), and c) the capacity for environmental input to modify or reset the timing or phase of the rhythm.
Influence of Sleep and Circadian Rhythms on Human Physiology
Effects of Light on Human Circadian Rhythms
Nonphotic Circadian Phase Resetting and Reentrainment

Disruption of the circadian timing system by shift work, travel across time zones, and the activities of our round-the-clock society has an adverse effect on many physiologic variables including hormones, glucose, metabolism, autonomic nervous system activity, the immune system, inflammation, neurobehavioral performance, and the propensity for, timing, and internal structure of sleep. This disruption can result in patient complaints of insomnia or excessive daytime sleepiness and can impair overall health. 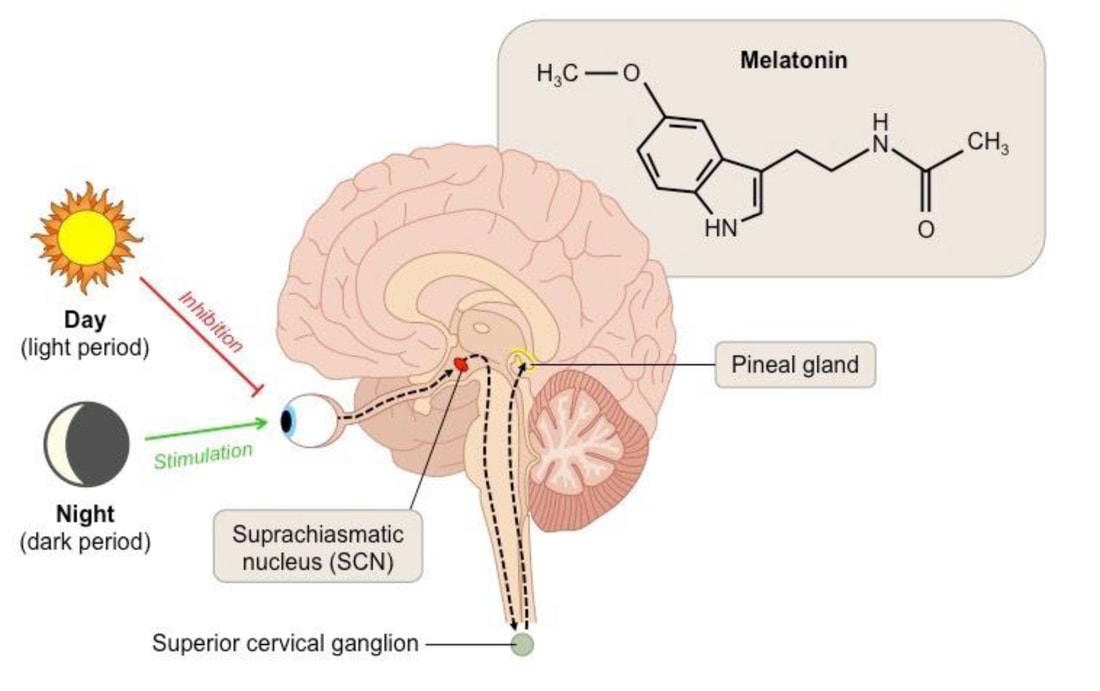 Circadian rhythms are  essential for the coordination of physiologic and behavioral functions with the 24-hour environment. Therefore disruption to the circadian system can result in a broad range of adverse mental and physical health consequences.

Melatonin is a key marker of circadian function. Melatonin is secreted by the pineal gland, and levels peak in the middle of the night. Light suppresses the normally observed nocturnal rise in melatonin. Melatonin can be measured in the blood, saliva, and urine, and both the timing and amplitude of secretion can be evaluated as measures of circadian alignment.

Shift Work and Social Jet Lag shift work is a major source of circadian dysregulation because workers are required to be awake during times when they would normally sleep. Many live in a chronic state of varying degrees of circadian misalignment, being awake at night on workdays and during the daytime on days off because of social and family responsibilities. A large number of individuals are required to wake up much earlier on workdays than they would prefer to, then sleeping in on non-workdays. The mismatch between work and nonwork sleep times is referred to as social jet lag. There is growing evidence that the circadian misalignment associated with shift work or social jet lag contributes to the development of disease , with the strongest evidence for an increased risk for cancer and cardiometabolic disorders. 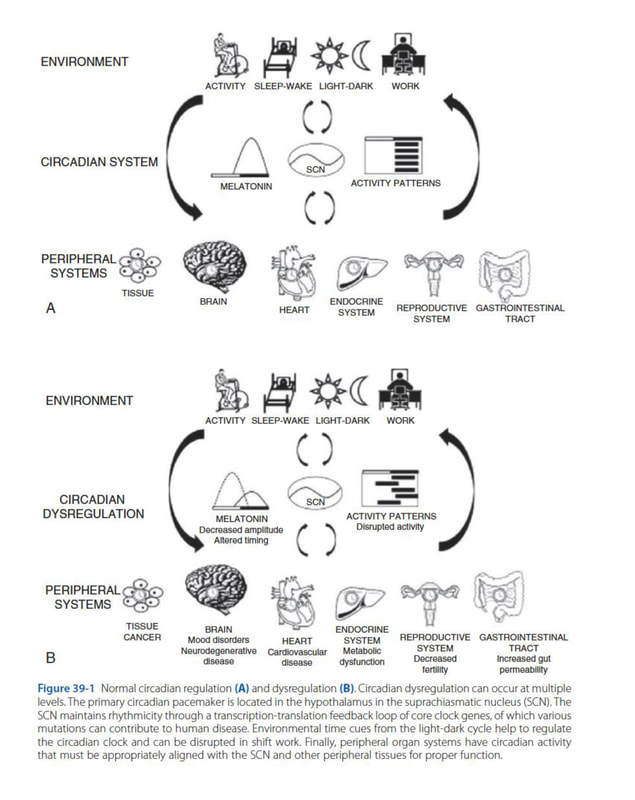 2.  Which of the following is true regarding the SCN?
a.  Activity is stimulated by melatonin
b.  The SCN core receives most of the retinal input
c.  It is most active during nighttime
d.  Reset by the light-dark cycle and changes in temperature

3.  According to studies, which condition/s are associated with shift work?
a.  Breast cancer
b.  Prostate cancer
c.  Impaired glucose intolerance
d.  All of the above

4.  How is DSWPD diagnosed and managed?

5.  How is ASWPD diagnosed and managed?
Answers
ARTICLE REVIEW
The association between mental health, chronic disease and sleep duration in Koreans: a cross-sectional study​
submit here
SCHEDULE FOR synchronous review and EVALUATION
References: