Following the perception of an acute stressful event, there is a cascade of changes in the nervous, cardiovascular, endocrine, and immune systems. These changes constitute the stress response and are generally adaptive, at least in the short term.
​
The following occur in response to acute stress: 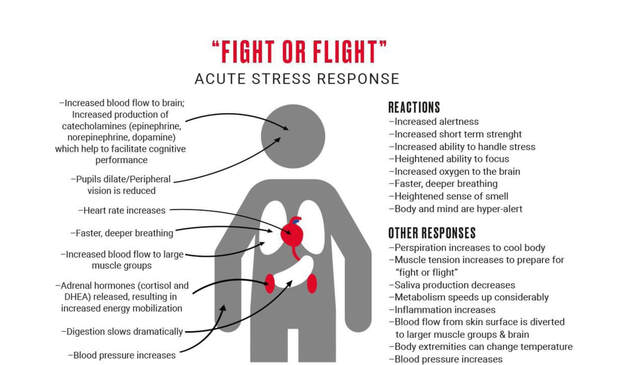 The acute stress response can become maladaptive if it is repeatedly or continuously activated.
Chronic SNS stimulation of the cardiovascular system due to stress leads to sustained increases in blood pressure and vascular hypertrophy.The elevated basal levels of stress hormones associated with chronic stress also suppress immunity by directly affecting cytokine profiles.

stress and the brain

The effects of stress on the nervous system have been investigated for 50 years. Some studies have shown that stress has many effects on the human nervous system and can cause structural changes in different parts of the brain. Chronic stress can lead to atrophy of the brain mass. This can cause changes in the response to stress, cognition and memory.

Memory is one of the important functional aspects of the CNS. Short term memory is dependent on the function of the frontal and parietal lobes, while long-term memory depends on the function of large areas of the brain. However, total function of memory and the conversion of short-term memory to long-term memory are dependent on the hippocampus; an area of the brain that has the highest density of glucocorticosteroid receptors and also represents the highest level of response to stress. It should also be noted that the amygdala is very important to assessing the emotional experiences of memory.

Cognition is another important feature of brain function. Cognition means reception and perception of perceived stimuli and its interpretation, which includes learning, decision making, attention, and judgment. Similar to memory, cognition is mainly formed in the hippocampus, amygdala, and temporal lobe. The net effect of stress on cognition is a reduction in cognition and thus, it is said that any behavioral steps undertaken to reduce stress leads to increase in cognition. Activation of stress results in the production and release of glucocorticosteroids. Because of the lipophilic properties of glucocorticosteroids, they can diffuse through the blood-brain barrier and exert long-term effects on processing and cognition.
​ 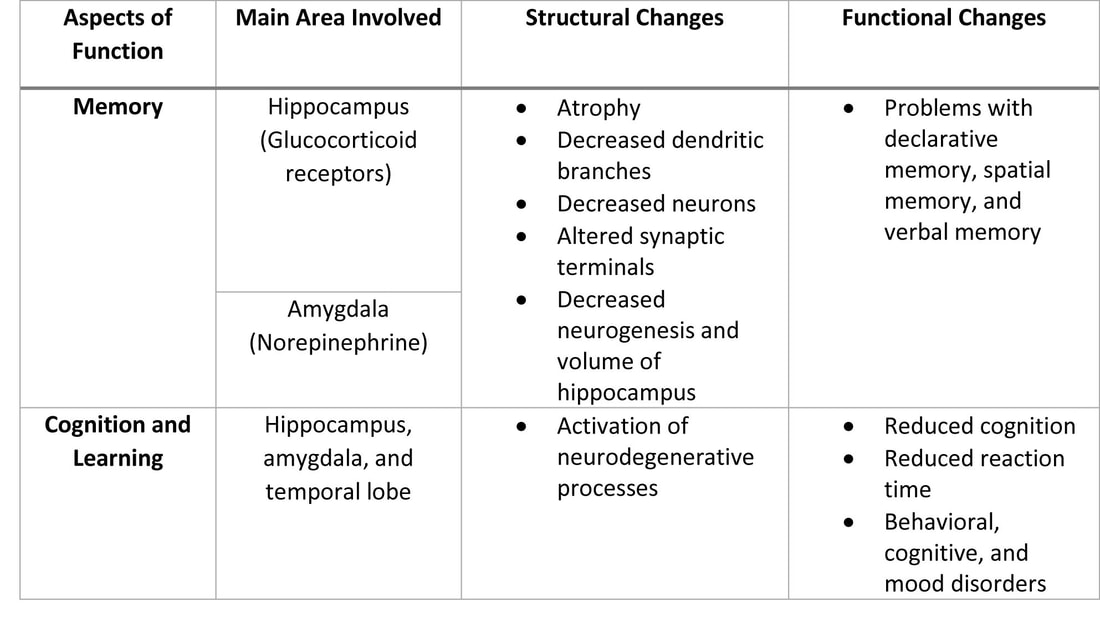 stress and the immune system

​Stress can affect the function of the immune system by modulating processes in the CNS and neuroendocrine system.​

stress and the cardiovascular system

Stress, whether acute or chronic, has a deleterious effect on the function of the cardiovascular system.​

stress and the gastrointestinal system

​The effects of stress on nutrition and the gastrointestinal (GI) system can be summarized with two aspects of GI function.
1.Stress can affect appetite 2.Stress adversely affects the normal function of the GIT​

stress and the endocrine system

​Stress can either activate, or change the activity of, many endocrine processes associated with the hypothalamus, pituitary and adrenal glands, the adrenergic system, gonads, thyroid, and the pancreas.
Article Review
The Impact of Stress on Body Functions
Psychological Stress and the Human Immune System
​

​In conclusion, stress may produce both beneficial and harmful effects. The beneficial effects are the preservation of homeostasis within the human body and the concerted efforts towards survival. However, the harmful effects of stress has received more attention because of their role in promoting illnesses. Many disorders stem from stress, especially if the stress is severe and prolonged. Thus, the medical community needs to have greater awareness and appreciation for the significant role of stress in the pathophysiology of diseases and treat them accordingly using both pharmacological and non-pharmacological interventions such as change in lifestyle, exercise, healthy diet, and stress reduction programs. The physician must also remember that response to stress will vary by individual, thus management needs to be tailored according to the person.
​
ADVANCE TO THE NEXT MODULE
References: